December 19, 2018October 20, 2020 CreatedBeloved
(This post contains affiliate links to Amazon. If you purchase the recommended books from these links, I receive a small commission at no extra cost to you, so thank you. 😊)

I’ve already admitted I’m a lover of books. I fell in love with children’s literature while taking a course on it in college. It was further flamed when I became a teacher. Thanks to Scholastic Book orders, my classroom library tripled and I loved seeing the delight in my students’ eyes when they discovered a new book. I am a firm believer that when a child says, “I don’t like to read,” it’s only because he or she hasn’t found the right book.
Each holiday (or change of season), I bring out a basket of books that are themed appropriately and place them on our fireplace bench for the kids to pick up at any point during their week. Bringing them out at specific times during the year also keeps their bookshelves a little more organized and not overflowing with books.

I’ve gathered some of my favorite Christmas books to recommend this season. While there are SO many fabulous ones out there, I’ve chosen to focus on ones that bring to light the true meaning of Christmas. I’ve included books that span ages ranging from toddlers to adults (in that order). Along with my little synopsis, I included a picture of each book open to a sample page; this way you can see what the illustrations are like and the type of writing in order to give you a better idea of the book as a whole. My hope is that this will spark a little interest in possibly adding to your own Christmas library.
Happy reading, beloved! 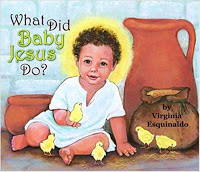 What Did Baby Jesus Do? (for babies and toddlers)
This is a short board book with simple rhymes. The reader asks if baby Jesus acted in similar ways to our own babies. It’s a sweet reminder that baby Jesus was fully human as well as fully divine.

A Birthday Party for Jesus (for ages 3-5)
With bright colorful pictures of anthropomorphic animals, this story follows a little bunny as he learns that it is Jesus’ birthday and tries to find a suitable gift to join the others in putting under the tree. He learns that His birthday is ultimately about love. 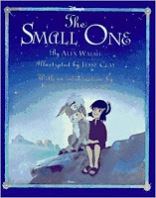 The Small One (for ages 3-6)
I was so excited when I discovered a few years ago that this was also a book! I grew up on the Disney cartoon from 1978. (It is part of the “Classic Cartoon Favorites, Volume 9” DVD along with ‘Mickey’s Christmas Carol’ and ‘Pluto’s Christmas Tree’.) It is the emotional story of a small old donkey who can’t carry his weight anymore and has to be sold. The little boy who feels responsible for him is saddened but tries to find someone at the market who will give him a good home. Just when he thinks the only place he’s wanted is the tanner, a certain man comes along asking to buy him in order to give his wife a ride to Bethlehem. I encourage you to watch the cartoon if you can too… Disney knows how to tug at your heartstrings and I was known to shed a tear or two each year when I watched this. 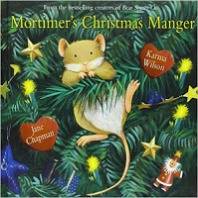 Mortimer’s Christmas Manger (for ages 3-7)
This is a darling story of a little mouse who notices a small house set up in the humans’ living room, which he assumes is for him. Rearranging the nativity scene, he makes himself cozy in the manger… until one night when he hears the dad reading the real Christmas story to his children. He learns that the manger was the only room made for Jesus and gently places baby Jesus back in His place. Mortimer says a little prayer that he might have a little place of his own and then spies a gingerbread house just his size. 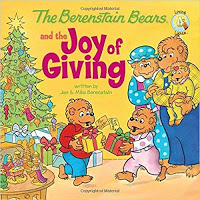 The Berenstain Bears and the Joy of Giving (for ages 4-7)
The beloved Berenstain Bear books have been around since the early 1960s and they still haven’t lost their touch for teaching a good moral.  I especially like this story because the cubs perform the nativity scene at their church. They also learn that it is fun to see the joy it brings others when gifts are given. 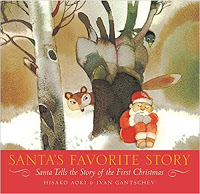 Santa’s Favorite Story (for ages 4-8)
While having a conversation with other Christian mamas as how to reconcile our kids’ obsession with Santa and the real reason for the season, a mom recommended this book and I’m so glad I added it to our collection. Some forest animals stumble upon Santa Claus sleeping up against a tree, and upon waking, he explains that he is just tired and wonders if he’ll be able to deliver his large load this year. The animals worry that Christmas might be cancelled and he assures them that Christmas could never be cancelled because it’s never truly been about him. He goes on to tell the story of the first Christmas and how it’s his favorite story because it reminds us about God’s love. He loves being able to spread that love by delivering presents.

The Legend of St. Nicholas (for ages 5-8)
I briefly mentioned this book in my first post about Advent calendars. We like to read this story on December 6th, St. Nicholas’ feast day. The story starts in modern times, with a father and son out doing some Christmas shopping. The boy overhears the story of St. Nicholas from the mall’s Santa. According to tradition, Nicholas lived in Myra about 300 years after Christ. Nicholas grew up in a wealthy family and had many opportunities to travel and see how people less fortunate lived. When he was still a teenager, his parents died but was left with plenty of money. He decided to help out his friends after hearing of their families’ struggles. He devoted his life to Christ and thought, what better way to celebrate Jesus’ birth than to bring presents to others? Nicholas was later made Bishop, and then named a saint. He was a friend to the poor and helpless, and this book is an excellent reminder of how “Jolly Old St. Nick” came to be Santa Claus.

The Sparkle Box (for ages 5-8)
This book could ignite a fun tradition for your family. A young boy named Sam notices a small sparkly box under their Christmas tree but his parents won’t tell him what’s inside, only that they add things to it once in a while. We learn at the end that it is filled with notes of things the family did for others (emphasizing Jesus’ teaching that whatever we do for others, we do for Him) – and it becomes theirgift to Jesus. It’s a beautiful message that teaches kids that it can feel rewarding when we give to others in need, especially when we have so much to be thankful for. (It even comes with your very own Sparkle Box to put together in the back of the book!) 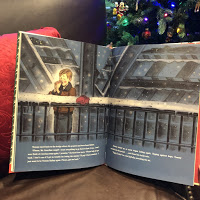 It’s a Wonderful Life, for Kids (for ages 5-8)
If you’re a fan of this black-and-white classic movie, then you’ll love this version written especially for kids by the man who played young Timmy Bailey in the film. It follows the same basic storyline except with the youngster as the one who needs reminding about how wonderful his life really is. The little boy, Tommy, has lost money and wants to just disappear so he doesn’t get in trouble. He prays for help. With the help of a Guardian Angel he gets a look back at his life as if he didn’t exist. He’s reminded of the good he’s done throughout his life.

The Gift of the Magi (for ages 8-15)
This love story is over a century old and still has the ability to move its readers to truly think about the act of selfless giving. While it’s written in the form of a children’s book and the length is appropriate for kids, I would save this one for slightly older kids, mainly because of the style of language and vocabulary. This edition in particular contains absolutely beautiful watercolor illustrations. A poor couple in old New York City struggle to find the means to buy each other a gift for Christmas. Each person had one prized possession already: the man, his grandfather’s gold watch, and the woman, her long gorgeous hair. Without each other knowing, they each sell their prized possession in exchange for a gift that would make the other’s even more beautiful: the man buys his wife a set of beautiful combs, the woman buys her husband a handsome watch chain. The author, O Henry, explains at the end that although this young couple seems unwise in selling off their most prized possessions and being left with rather useless gifts, they are actually the wisest – they sacrificed for each other their greatest treasures out of love and devotion. They are similar to other wise men, the magi, who delivered very valuable gifts once (and practically invented the art of giving). 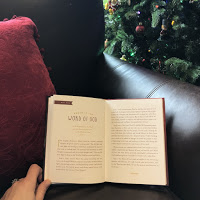 Unwrapping the Names of Jesus (for young adults to adults)
This is my one suggestion for adults. If you are looking for a devotional during the Advent time, I enthusiastically recommend this one. For each day of the week in all four weeks of Advent, there is a short devotion dedicated to a name that Jesus is also referred to as. Each devotion ends with a little “challenge” and a prayer as well as other scripture verses to reflect on. It is a wonderful way to draw ever closer to Jesus and prepare our heart for His coming during this busy season.
Other children’s books worth checking out this season…. The Birth of Jesus, God Gave Us Christmas, The Christmas Baby, Room for a Little One, This is the Stable, The Stable Where Jesus Was Born, The Little Shepherd’s Christmas, and Why Christmas Trees Aren’t Perfect.
I would LOVE to know what Christmas books you and your children read during this special time of year! Please comment below or follow me on Instagram @createdbeloved.

“But the angel said to them, ‘Do not be afraid. I bring you good news that will cause great joy for all the people’.” Luke 2:10 NIV

Today is St. Elizabeth Ann Seton’s feast day, or Mother Seton, as she was known by to many. I chose her as my patron saint this year because I thought it was high time I knew more about her. I knew I liked her because she is the patron saint of Catholic schools because she started the parochial school system; I’ve attended and taught at Catholic elementary schools. I knew she was the first canonized American-born saint, and that her first name is my middle name 💁🏼‍♀️, but she’s so much more… ⁣
The Christmas Liturgical Living Wreath is on sale and ready to ship! 🙌🏼 📦 Depending on where you are in the US, it should arrive in time for the first day of Christmas! 👏🏼🎄♥️